I have bins and bins of my old mid to late 80’s G.I. Joe toys in the basement. I’ve been holding onto them so that one day I can play with them with my son.

Now that Lil’ G will be turning 1, my wife and I spent some time in the basement going through the toys to see what we have. I had to spend much of the time defensively describing what various weapons and vehicles were and how they were used. (She was slightly less impressed than I was.)

It left me with the realization that many of the G.I. Joe weapons and vehicles I found to be so cool as a child were actually idiotic Kamikaze machines and I would never want to take into actual combat as an adult!

Disclaimer: I am only pulling from the 1982 series I to 1991 series X. Series XI started the Eco Warriors, Drug Enforcement, neon colored weapons and other nonsense of whose existence I refuse to acknowledge.

If you go out with two buddies on a Saturday night and you’re the one that gets stuck in the back seat, it’s safe to assume you’re the least popular person in your crew.

The same rule applies to G.I. Joe’s HAVOC. If you’re riding into armored vehicle combat and your two buddies get to ride indoors (granted their only protection is glass?) and you are forced to ride on top of the vehicle completely exposed to enemy fire, the elements and the concussive force from your own canons, you are by far, the least popular person in the crew.

Even if you are one of the “cool” crew members that enjoys the comforts of being indoors, you still had to wonder what the design engineers were smoking. Had they never heard of ergonomics? The drivers lay on their stomach and utilize joysticks above their shoulders? I strained my neck just looking at them.

And seriously, the best armor they could come up with for the crew compartment was glass? At that point, the only worse idea might be to just dip the whole darn thing in chrome and make it an easier target for enemy to spot on the battlefield…which they later did for the Sky Patrol edition of the HAVOC.

On paper, the General isn’t all that bad. It has a heavy main gun, strategically placed smaller arms around the vehicle for protection from infantry attack, an accompanying helicopter for scouting and protection and an armored cabin for the driver and commander. This is a tough, big vehicle.

Emphasis on “big”. As in way too big and heavy to fit across a bridge or maneuver through urban, rocky or forested terrain “big”.  So unless you are advancing on your enemy over a vast open tundra, the General is basically a huge, un-maneuverable land barge of a target for enemy aircraft or artillery.

But hey, at least the designers didn’t make it out of chrome. 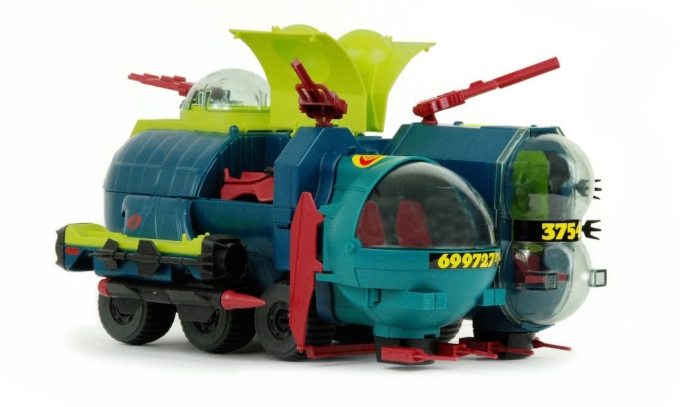 What the heck is going on with this thing and where do we start?

We have already established that for some asinine reason, G.I. Joe combat engineers view glass as being effective armor, which makes this one of the safest combat vehicles in the Cobra motor pool I guess.

The sphere in front detaches to form an underwater vehicle that looks like it floated right out of a Roger Moore era James Bond film. The Bugg also comes with two, what I am going to go ahead and label as “Tactical jet ski hovercraft type things”.

Also, as mentioned earlier with the HAVOC, if you are the crew member forced to go into combat completely exposed outside the vehicle, you are not as well liked as you thought you were. With that in mind, if you are the Bugg crew member who is assigned to lay down outside the tank next to a missile (whose blast exhaust would barbecue you), you may want to start asking yourself why nobody likes you…

Remember earlier we mentioned something about leaving crew members exposed to enemy fire and the elements?

Enter Cobra’s F.A.N.G. helicopter! This poor pilot is seated practically outside the helicopter with only like 12 inches of clearance between his head and the propeller.

I don’t see any ear protection, eye protection or even a seat belt. Not even any stupid glass for protection. I’m guessing that OSHA or the NTSB never approved these plans.

In 1985, Hasbro’s G.I. Joe line struck gold when they recruited the popular professional wrestling personality Sgt. Slaughter to join the G.I. Joe line as their new trainer. Hasbro wanted to follow up that success with another popular personality: Sylvester Stallone’s Rocky. They even released Rocky’s bio in the 1987 comic book G.I. Joe Order of Battle #2. 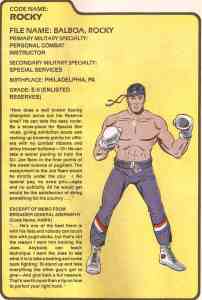 However Stallone was offered a more lucrative deal from Coleco to launch an entire Rambo toy line and cartoon.

This left Hasbro scrambling and quickly signed William “The Refrigerator” Perry, who had just gained worldwide recognition for his part in the Chicago Bears 1986 Super Bowl win.

That is fine. What isn’t fine is the weapon somebody decided to send him into combat with: A football attached to a stick. That’s it. Nothing else. Not even a Gatorade bottle to replenish lost electrolites.

It is a ball! And he can’t even throw it at enemy combatants to cover a teammate because it is attached to a stick!

This tank actually looks pretty cool. Nice color scheme, it has canons, missiles and only a limited amount of what I am now referring to as ‘transparent armor’ (i.e. glass).

According to the packaging, D.E.M.O.N. stands for Dual Elevating Multi-Ordinance Neutralizer. That sounds pretty…wait a second…”Elevating”? As in vertically stand up taller?

Why would you want to take a huge target and turn it into a taller, less stable and more vulnerable huge target?

And, for that matter, how is this even supposed to work? Tank treads don’t spin 90 degrees or slide horizontally. If technology exists to create hydraulics that powerful, maybe they can produce transparent armor?

First off, does anybody actually ride inside tanks in the G.I. Joe universe? I know Sgt. Slaughter is tough, but wouldn’t this tank be more effective if he were concealed behind some type of armor, even the transparent kind (glass)? Are those rock hard pecs supposed to stop enemy bullets? At least give the guy a coat in case it rains.

My second issue with this ‘Terminator’ is its complete lack of any purpose whatsoever. It is a tank armed with only 2 little small caliber guns and two little missiles (whose exhaust back blast would kill any ride alongs it takes into battle anyway).

So it is a treaded vehicle with virtually no firepower, can only carry two soldiers and its pilot can be taken out with a slingshot (or even the Fridge’s tactical football).

Also, “Tag Team” strongly implies that there is at least one other teammate with you for you to “Tag” in. This is a single poorly designed vehicle with an operating crew of a single unlucky soldier. Who is supposed to be getting “tagged in“?

Please give my contact info to the procurement office that placed the order for this vehicle. I have a solar powered flashlight and a patent on a black hi-lighter to sell them. 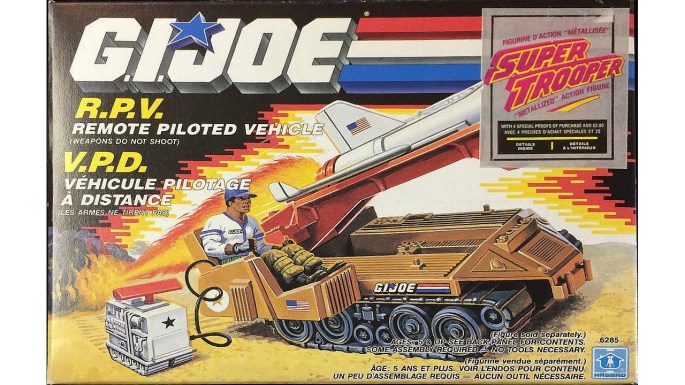 Speaking of deadly friendly fire via missile exhaust backlash, let me introduce you to the G.I. Joe R.P.V. and Cobra IMP.

First, in the case of the Remote Piloted Vehicle ( or R.P.V.), if a dude needs to sit in a pilot seat on the vehicle, it is not “remote piloted”. 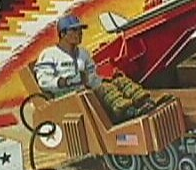 Second, do the engineers simply have no clue how rocket propulsion actually works or do they simply not like their own soldiers?

Rocket blasts are hot and I don’t mean “sexy” hot, I am talking about the “Ouch, that friggin’ burns to the touch!” hot.

How are you going to fire these missiles literally inches from peoples heads and not expect them to come back showing off their best Uncle Owen from Star Wars impression?

The Razorback is probably best described as an amalgam of bad ideas wrapped into one unique bad idea. Let’s run through the list:

Protecting the crew against enemy fire with nothing but a piece of glass? check!

Elevates to make itself an easier target for enemy gunners? Check!

Rather than being camouflaged or olive green colored to blend into surroundings, the Razorback painted a vibrant color enemy bombers could spot miles away? Check! (I mean if this color were on a Sherwin Williams paint deck, it’d be called “Center Of The Sun Yellow”)

At least nobody is riding on the outside of this death trap, I guess.

They are awesome and heavy because they fire a lot of bullets very, very quickly. Like up to 6,000 rounds a minute quickly.

Now, granted Rock & Roll has biceps that are proportionally bigger than my thighs, but I still gotta believe that these guns would be a little heavy to carry into combat empty, much less loaded with tens of thousands of rounds of ammunition!

I am no math savant, but I did a little multiplication here.

The second edition Rock & Roll action figure had 4 of these mini-guns (which fire approx 6,000 rounds per minute each) which he would fire simultaneously.

This means that in order for Rock & Roll to sustain 30 seconds of continuous fire, he would need 12,000 rounds of ammo (otherwise known as a $#!T-ton). We are talking around 400 lbs of ammo alone! No wonder he hit the gym so hard between 1982 and 1989, or began taking the same supplements that Barry Bonds did.

Plus, how could he possibly have any control or aim when unloading that much heat? He might start off aimed at a particular target, but after the first nano-second of recoil, he would basically be reduced to firing blind anti aircraft fire. Ventura could barely control one mini-gun in Predator and yet this dude is simultaneously blasting 4 of them! Anything within the same zip code would be fair game.

You know how sometimes you say something incredibly stupid as a joke or just to see if somebody is paying attention? Or maybe do something dumb on a drunken dare?

Well, even if that was not the case with the Cobra Pogo Ballistic Battle Ball, that is the story Hasbro should roll with when people ask about this monstrosity.

Like a Pogo stick, this vehicle bounces literally straight up and down repeatedly, which has got to have some negative impact on the pilot’s aim, not to mention his spine. I assume, unlike the F.A.N.G. helicopter, that the pilot is seat belted in so he doesn’t go flying through the (you guessed it) glass canopy. 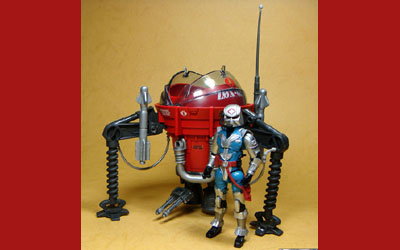 The Pogo is also armed with a pair of missiles…that fire directly into the sky. So unless you are directly under your enemies bomber and, you know, they haven’t already bombed you, I guess you could shoot them down.

What are your thoughts?

Are there any mid to lat 80’s G.i. Joe vehicles I missed that you would hate to ride into combat in?

If you enjoyed this list, check out The Top Six G.I.Joes You Would Not Want To Roll Into Combat With!

Note to readers: if you purchase something through one of our affiliate links we may earn a commission.