But seriously, this movie is 35-years-old, so if I am spoiling anything in this article for you, who’s fault is that…

Ask any Trekkie which is the best Star Trek movie ever made and the most predominate answer will always be Star Trek II: The Wrath of Kahn.

Well, that and that the paper used to print the script for Star Trek V: The Final Frontier should have been used for toilet paper instead. At least then, some use would have come from the trees it was printed on…

Side Note: All Trekkies know to stick with the even numbered Star Trek movies only.

The even numbered Star Trek movies also happen to be the only ones that Wrath of Kahn‘s director Nicholas Meyer worked on. Coincidentally, I am sure this has something to do with him being  brought back to the Star Trek universe for the new Star Trek: Discovery series.

The story of how the best Star Trek movie was created really begins in 1977 with the release of Star Wars. Paramount Pictures saw the success (profits) of Star Wars and was desperate to ride it’s galactic coat tales, which lead to the release of the snoozer that would later became known as Star Trek: The Slow Motion Picture.

In an effort to correct their mistake, the studio turned to low budget producer Herve Bennett with $11 million (a quarter of Star Trek I’s budget) and asked him to write a successful sequel with more action (which couldn’t have been that hard to do) than the original movie .

Wrath of Kahn features the most well written script of any of the original Star Trek movies. Smart, fast paced dialogue between the perfectly characterized crew with the right amount of humor and just enough Shakespearian effect catches the original cast at the top of their game.

According to urban legend, Bennett binge watched the entire run of the original series, decided that Kahn was the best villain from the entire series and chose to write a revenge sequel to that episode (Space Seed).

(When Nicholas Meyer was brought on as director, he re-wrote much of the script but because Hollywood’s rule book for crediting writer’s has more layers and stipulations than Google’s search algorithm, he is not credited as a writer.)

All the returning crew member’s lines were perfectly written for each character with more subtle humor than I remembered. The interaction between the big three (Kirk, Spock & McCoy) felt unforced and flowed organically, even in the emotionally charged scenes towards the end.

William Shatner puts on the best performance of his Captain Kirk career, dealing with his own mortality on so many different levels. From something as subtle as the need for reading glasses to meeting his resentful adult son to the death of his best friend (I warned you about the spoilers), The ‘Shat’ (over) delivers the perfectly characterized dialogue in the way only he could.

Star Trek has often been described as a soap opera in space and Ricardo Montalban’s revenge seeking Kahn is the best possible Shakespearian villain for this interstellar opera. Blaming Kirk for the death of his wife, Kahn’s obsession with revenge to the point of self destruction was an instant classic.

Montalban is possibly the only one who could have portrayed Kahn’s level of obsession, to the point of quoting Melville, without going over the top and coming off as cartoony. I found that his level of over delivery actually paralleled Shatner’s over delivery and helped sell the rivalry of him and Kirk. The Yin to Kirk’s Yang or the Boba Fett to Kirk’s Han Solo.

James Horner’s score was another dimension of this film that distanced it from the others in the franchise.

Horner most famous work is probably from Titanic and his most unusual is probably still the bizarre metal oil drums on the Commando soundtrack, but this film has some of his most emotional work. The score was powerful at the right moments of battle and subdued and reflective at the emotional times of the movie. I want Scottie to play Amazing Grace on his bag pipes at my funeral!

Director’s Cut vs. The Original

The Director’s Cut opens with an entertaining William Shatner interview reminiscing about the making of Wrath of Kahn…and at times, The Search for Spock (Shatner got a little confused at times and was called out on it by the interviewer).

The most notable change of the film itself was not so much the additional material, of which there was not much of, but the modernization of the film coloring. 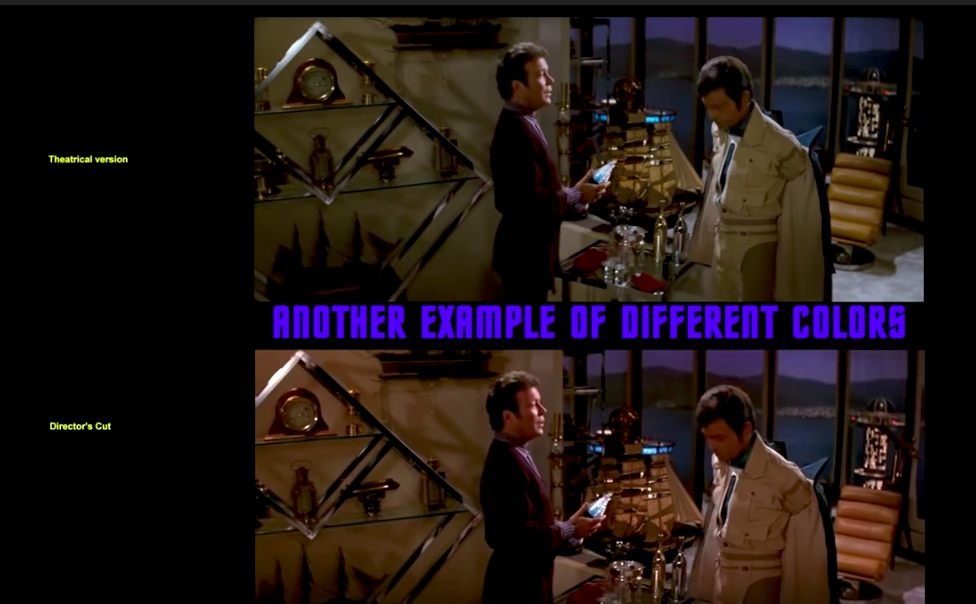 Even with the improved color definition, the discrepancy between early 80’s technology and current high definition was painful at times on the big screen.

Most director’s cuts are mostly additional scenes were cut for the theatrical release for good reason. Whether scenes are just unnecessary, lack quality, negatively effect the flow of the movie or for simple run time, the fact is most cuts are made for a good reason.

However, the few minutes of footage that were re-inserted into the Wrath of Kahn Director’s Cut all worked very well and assisted the flow of the film.

I enjoyed the extended dialogue where Bones explains to Kirk what reading glasses are and how they are used. Kirk’s extended interaction with Scottie’s nephew also helped to add more emotional buy-in and weight to his death scene later in the film.

I had hoped that the extended scenes would address a plot hole that always stuck out like a Darth Vader coplayer at a Star Trek Convention: If Kirk, Bones and Saavik were able to beam from the space station Regula I to the planet, how come they were unable to beam back aboard the Enterprise? Spock said the Enterprise did not have enough power to beam them back, but they were using the beaming platforms on Regula I.

Other Things I Noticed:

It was impossible to watch the film without noticing how many of the cast are deceased. Leonard Nimoy, DeForest Kelley, James Doohan, Ricardo Montalban, Bibi Besch, Paul Winfield, Merritt Butrick. It was a somber feeling.

It may just be because I was hungry at the time and unwilling to mortgage my home just to purchase a bucket of popcorn, but I thought Joachim’s arm looked like a huge strip of yummy bacon!

After the near franchise killing turd blossom that was Star Trek V: The Final Frontier bombed at the theaters, Paramount realized their best bet was to re-create Wrath of Kahn as closely as possible. (Even Shatner poked fun at #5 in the interview)

So the studio brought back Nicholas Meyer to write and direct Star Trek’s own version of Star Wars: The Force Awakens: a re-quel (or combination sequel and reboot)

Star Trek VI: The Undiscovered Country featured a very similar naval battle between the two vessels, an eccentric enemy captain repeatedly over articulating quotes from famous literature (this time Shakespeare as opposed to Melville),  a young female Vulcan Lieutenant on the Enterprise and Kirk coming to terms with his own mortality (again).

Any other Star Trek re-release, I may have thought twice about the cost of a ticket, but to seeing Kirk and Kahn match wits and over delivered dialogue on the big screen was only logical.

It was wonderful watching this well written sci-fi revenge classic on the big screen with a theater full of other geeks who appreciated these timeless characters.

Star Trek II: The Wrath Of Kahn Director’s Cut scores a 4.5 our of 5 (More Than Babysitter Worthy) on the Geeky Daddy Movie Rating scale and a warm green on the Sidekick scale (mostly kid friendly).

Although Star Trek II: The Wrath of Kahn Director’s Cut had a limited amount of additional content, what was added did assist the story telling without disrupting the flow of the movie and the improved colorization was much appreciated.

Tell us your opinion of this film and make sure to check out other Geeky Daddy Movie Reviews. 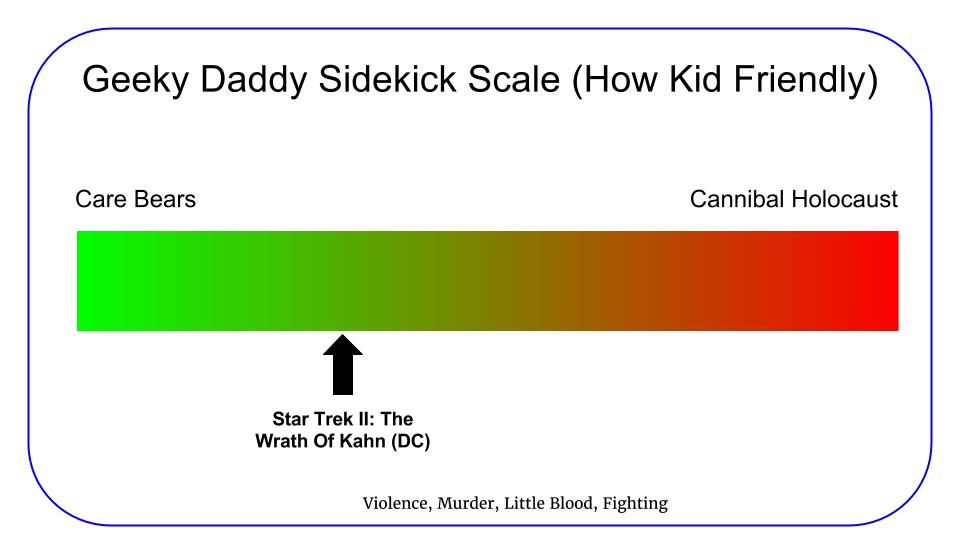