Seriously, who hasn’t had shopping cart races at the store when they were young.

I remember in college, we would pile into cars by the baker’s dozen and head over to the 24 hour Meijers grocery store just to have grocery cart derbies and races through the store.  Nothing beats that feeling of slamming a friend into an end cap of pet supplies…

Anyway, Mario Kart 8 launches for the Nintendo Switch April 28th and Target has entered into a co-promotion with Nintendo to spice up 650 Target stores with some mustached Italian plumber action!

(Admit it, you read that caption in Mario’s voice.)

The big red bollards (those huge red sphere’s designed to stop stray cars – I didn’t know they had a name either) will be covered to resemble our favorite plumbers. 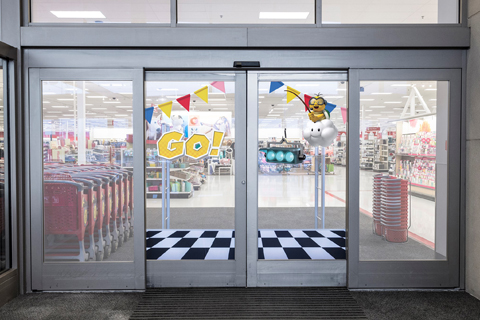 The front doors will have motion sensors that play Mario themed music.

And of course some of the carts will be decked out with Mario, Luigi and Princess Peach.

You can read more about the promotion here.

With a little help from our green screen, Lil’ G-Man enjoys himself a little Mario Kart as well.