The Force is strong with these toys!

The fact that the U.S. toy market is big business and that Star Wars Toys make up a large percentage of that business should come as surprising news to absolutely no one.  But as my father-in-law would often say, “I don’t think you understand the amounts we are talking  about here…”

$20.4 billion (with  “B”) in 2016 toy sales in the United States alone, per the global information company the NPD Group.  The industry has a compounded annual growth rate of 5 percent over the past five years.

One of the major contributors in this growth is the Star Wars franchise, which since Lucsfilm’s purchase by Disney, has switched from launching their movies in May to December.  This was a very smart move by Disney to capitalize on selling the new Star Wars licensed toys with the holiday shopping season.

Star Wars licensed toy sales in the United States alone topped $760 million or roughly 3.75% of the entire US toy market!

With Disney planning on releasing a new Star Wars movie every December for the foreseeable future, the only danger for this sales trend slowing down would be over saturation or over licensing of the Star Wars brand.  As long as Disney maintains their high level of quality product, both on film and in their licensed toys,  I do not see consumer fatigue of the Star Wars brand anytime soon.

Some of this year’s increase can be attributed towards consumer taste shifting from the standard action figures & accessories (down 1%) to higher ticket items such as games & puzzles (adult & youth) and outdoor & sport (mostly seasonal). 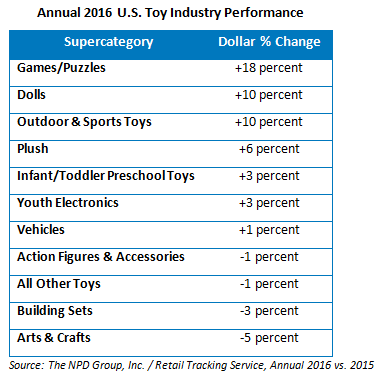 Another small contributing factor for the annual increase could be that there were two additional shopping days this year between Thanksgiving and Christmas (one of which was a Saturday). However since sales were down the first three weeks of December until a sharp rebound by last minute shoppers, I think this impact was probably minimal.

Regardless of the reasons, do not expect Star Wars toys to be extinguished from our galaxy anytime soon.

What were some of your favorite toy purchases this year?